One day in August 2016, I received a message from dear Colleen. Colleen said that after she read Li-Ann’s post Bro Fist, she missed LA and would love to Skype her to chat or do a craft together.

I am most grateful for Colleen’s kind gesture and we arranged for the online connection. LA was very excited coz she really enjoyed to talk to Colleen Jie Jie (sister)! Colleen planned to teach LA how to fold an origami heart. She was very patient and encouraging. I let LA follow Colleen’s instructions and stepped in when LA needed help.  Colleen also showed LA how she could string a few hearts up into a nice garland. We were happy that the call went well and LA learned a new craft.

LA was more serious about the craft than we thought. The next couple of days, I saw her trying to fold more hearts on her own using rough paper!! It was as if she wanted to internalize it.

The craft was really simple. But I learned 2 things from it. First, we don’t need a lot to bless. I was very touched by Colleen’s love for LA. She might thought that she was only connecting and enjoying a craft with LA but she had taught LA how to fold paper in a purposeful way and that had sparked her interest to try to fold other things using paper! In fact, folding paper is a very practical skill! It was something LA was able to do more precisely in the past year.

Second, imitation leads to innovation. A few days later, I observed LA folding the paper in a different way (that was NOT what Colleen taught her). I was going to jump at her but I decided to ask her why she was doing that. She said it was to get the line she needed. When I thought about it, I realised she was right! It was a quicker way to get her line. She innovated!! I knew the foldings were great for training fine motor skills so I convinced her to fold more. She must have folded more than 100 big and small hearts! The small ones were especially trying for her but I kept encouraging her to press on. Thankfully she didn’t need much persuasion. Many were stuck onto cards – which was LA’s idea, we gave a garland away, decorated a room for a youth reception with more garlands and taught some kids the craft at an outreach. Incidentally, one of the recipient of the cards was Colleen’s mom! She was one of the leaders from US who came to Singapore to conduct a training in November 2016. Perhaps blessings DO come full circle 😉 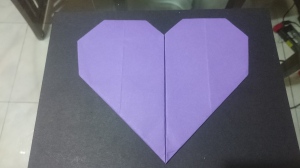 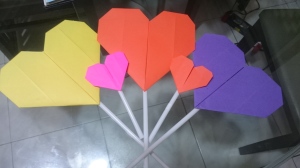 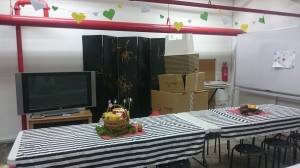 2 thoughts on “Thank You for Your Heart”